siniora with Amanpour in Cnn : Lebanon in the pocket of Assad 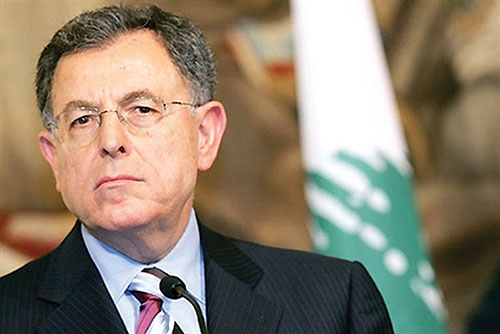 PM siniora with Amanpour in Cnn : Lebanon in the poket of assad

CNN: Fouad Siniora, thank you so much for joining me, let me ask you, are you calling for Mr. Mikati’s government to resign? And if so how do you

answer your western friends and even the president of Lebanon who say that would not be a good thing at the moment because it will plunge your country into further instability.

Siniora: I think the contrary completely.

CNN: are you calling for him to step down?

Sinora: yes, for sure. I’m asking this government, for the sake of the country…

CNN: In that regard, as you know people have pointed the fingers of blame for this incident at the door of president Bachar El Assad, even the French foreign minister has said that while the investigation continues, it probably was that regime, he went on to say: the interest of Bachar El Assad, who is a manipulator, is to expand the contagion into turkey, Jordan and Lebanon. The fact that you’re now calling for the dissolution of the government, are you not playing into the very hand of Syria which wants to see instability in your country, turkey and elsewhere?

CNN: You talked about how the government is not neutral, that it is sending arms, materials and other things to the regime of Bachar el Assad, but also some of the Sunni opposition is also helping the other side, the rebels, the uprising. This policy of disassociation that Lebanon has had, do you think it can continue or you’re being sucked into this war now?

Siniora: We are on record that we have asked some many times that the Lebanese army will deploy all along the Lebanese borders with Syria and we are still committed to this principle and even much more, we asked after all what has happened because of all the violations of the Lebanese borders and the trespassing on it and the Syrian regime army who has really been in Lebanon several times kidnapping people, killing people and bombarding the Lebanese territory,we have asked for the UNIFIL forces under the security council resolution 1701 to be extended towards the border of Lebanon with Syria.

CNN: Some analysts have suggested that Syria, the regime of Bachar El Assad is basically sending a message to you in Lebanon, to Prime Minister Erdogan in Turkey: stay out of this fight, leave it to me, and don’t get involved. In fact President Assad, last year said that this kind of intervention whether it’s on the ground or whether it is sending arms, is something that is going to divide the whole region. He said: any problem in Syria will burn the whole region. If the plan is to divide Syria, then it is to divide the whole region.  My question to you: do you think Assad is sending a message to Lebanon and to Turkey, now that this conflict has spilled across both of your borders?

CNN: So what do you see in this scenario for the immediate future, for Lebanon and for Syria?

CNN: finally, you speak quite vociferously against them, you’ve seen what happened in your country and you blame them for it, are you not afraid for your own life?